“The Other Two Men” is thought-provoking theater

Modern society’s interpretation of history is never certain. Despite our best attempts to learn from the past, our current resources limit us from experiencing the proper lesson. We try anyway, for as the old saying goes, “Those who forget the past are condemned to repeat it.”

A new play on stage at The Players’ Ring in Portsmouth is spinning that popular belief into a reverse concept: If we were to repeat the past, would we learn from it?

In “The Other Two Men,” presented by Oz Productions, this question is explored through the interactions between Saskatoon II (Emery Lawrence) and Nebraska II (Bailey Weakley), clones of two of the four long-dead founding fathers of a future society built upon a colonized Milky Way galaxy. Saskatoon and Nebraska are under observation by their creators, who hope to discover historical intricacies by replicating the lives of the original two founders through their clones. But the controlled nature of their existence causes the clones to question and debate the ethics and value of such an endeavor.

Written by Lisa Shapter and directed by Tomer Oz, the two-man show is great entertainment for fans of the sci-fi genre, particularly those seeking a production with non-traditional plotlines. “The Other Two Men” is attractively unorthodox, a good choice for anyone looking for a different kind of theater experience.

The scenery and detail of the set is refreshingly sparse, allowing the audience to devote all of its attention to the two actors onstage. The spotlight remains on Lawrence and Weakley, who cope with the pressure through a dedicated maintenance of character. Their dialogue is steady and their facial expressions reflect the strong emotions their characters are feeling. The two stars develop and maintain a clear chemistry.

Despite the compatibility of the actors, Nebraska and Saskatoon have conflicting reactions to their circumstances. While Nebraska continually expresses worry and doubt about their situation, Saskatoon is more resigned to his fate and optimistic about the outcome of the experiment. Although this dynamic creates an interesting tension between the two, Saskatoon gets somewhat short-changed as a character, lacking Nebraska’s depth and vulnerability. This results in a slight imbalance in the plot.

The lighting for the production is well done, but some of the sound effects are vague, particularly the source and meaning of the sounds the characters hear in their heads. Furthermore, the narration that accompanies different scenes is often difficult to understand and too brief for the audience to adequately consider.

But the artfulness of the writer and director, the performance of the actors, and the skill of the crew are all on full display in this production. The cast and crew’s ingenuity has created a compelling and thought-provoking show out of scant resources.

“The Other Two Men” is onstage at The Players’ Ring in Portsmouth through July 24. Show times are Friday and Saturday at 10 p.m. and Sunday at 9 p.m. Tickets are $12, available here.

My author copies of A Day in Deep Freeze have arrived!

(These are already been spoken for but to get your own paperback or ebook copy go to Amazon, Barnes & Noble, or the Aqueduct Press website.) 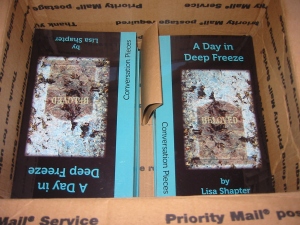 My alternate history novella A Day in Deep Freeze is now available in paperback and ebook forms!

1963: Emran Greene is a successful corporate accountant, a hopeful soon-to-be-father, and an unremarkable husband–except for the lingering effects of an experimental wartime truth serum, his ex-boyfriend, the impossibility of his conceiving a child, and all of the other secrets he keeps from his wife and his employer. One of these, the secret of the lonely grave he visits regularly in Riverport’s Castleview Cemetery, holds a tragedy that just won’t stay gone…

My new short story “Grave’s First Day” is out in Issue #1 of A Coup of Owls.  Since it is part of a linked set of stories, some fans have been asking me where to catch up on the other stories.

Here is a list of the stories in internal chronological order, with links:

3) “The World in His Throat” in Things We Are Not: An M-Brane SF Magazine Queer Science Fiction Anthology (2009)

And an unrelated alternate history novella set in New England about the unintended side effects of a WWII-era drug developed to create affinity between an interrogator and interrogatee:
A Day in Deep Freeze Aqueduct Press (Conversation Pieces series no. 46)  (April 2015).